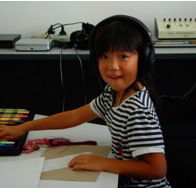 Yours was another door we knocked on and we are so happy we did as it has changed our lives and more importantly our children's in a very positive way. Some changes were immediate but, as expected, the bigger changes occurred over time.

Michael is in his final year of school and we are very proud of his confidence and focus on succeeding previously this seemed impossible for him. The changes in Felicia have been no less remarkable, academically Felicia has always struggled but not anymore, she still works very hard but is now achieving results in line with her efforts.

...Towards the end of the AIT…we began to notice that she was playing better with friends. There was more variety in her play, having more ideas and much more experimental with the toys that she already had. Her toys used to sit on the shelf until she was prompted to play with them. Now she was taking initiative on her own. She also was playing better with her sister and even able to choreograph a tap dance routine.

We were also surprised at how she described her mind previously being "blocked", like a "door was blocking her brain" and that she couldn't think. And that now she was able to think clearly and quickly…

She has come home from school without meltdowns and quite happy! She says that she is less irritated by everything. Although sounds seem louder than before, she feels less insecure about them and generally does not panic…

We noticed a few positive changes from our son just after he completed the AIT and started the reflex inhibition program. He stopped saying 'what Mum?' continuously almost immediately after starting the AIT but unfortunately this didn't last for long and he's back saying 'what Mum?' all the time again.

Within a couple of weeks after he finished the AIT we had three fairly major examples of improvement:

1) We went to a party and for the first time he wasn't anxious and clinging to me, he actually played with the other kids, took part in the activities, and was a lot more independent than normal. I had always wondered if his problem behaviour at parties was due to the noise level.

2) A few days later we had a playdate and, again, he wasn't anxious or clinging to me and played well with the little girl and didn't want to leave. It was a playdate with a mother and child that he didn't know so this was even more surprising.

3) He had his school concert and he actually performed with his classmates and sang at the top of his voice and participated. The previous year he had been paralysed with anxiety and had not been able to participate. This was another situation where I had wondered if it was the noise level that was a problem to him.

Visit us
We’re always happy to spend some time talking with parents. Email or call us on 9835 4030 to arrange a time.

Common Behaviours
We have created a list of behaviours we see in children who have physical issue affecting their learning. Read more here.