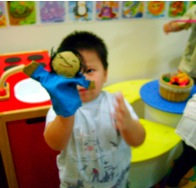 June Webb set up her own learning and therapeutic centre, Focus on Individual Learning (FOIL), in 2003. ‘Send them to June’s’ is the recommendation many of the parents we see have received from professional and other parents.

From 2008 to 2010, June partnered with Jyoti Menon to lead JJs Haven, a daily early education programme. This business came to an end when Jyoti relocated.

Understanding how children struggle to learn

June was a parent who saw her child struggling. Little Susi is now a grown up and has an MSc, her dyslexia has become something she’s learned to manage. Susi inspired the work June went on to do with kids who have all sorts of learning difficulties.

We are a registered with MCYS as an Early Intervention Programme and we are an Approved Institution for the Baby Bonus Scheme.

June began working with special needs children in 1992. Her interest in this work began years before when she realised her own daughter was struggling with learning in the traditional school environment. Susi, June’s child, was later diagnosed with dyslexia. Meanwhile June studied and got her degree in teaching at Sheffield Hallam (UK).

She set up her own learning centre after 10 years working in Singapore’s schools.

In 2002 June became an Auditory Integration Trainer, registered with The Georgiana Institute and AIT-PRO (USA). She also became a Neuro-developmental Therapist after training at the Institute of Neuro-Physiological Psychology (UK).

June raised her family here in Singapore. Before Asia she lived in the UK and South America. She loves speaking Spanish and helping behind the scenes at The Stage Club.

Visit us
We’re always happy to spend some time talking with parents. Email or call us on 9835 4030 to arrange a time.

Common Behaviours
We have created a list of behaviours we see in children who have physical issue affecting their learning. Read more here.